The weather has been wonderful lately. Not too hot with highs of 35 to 30 degrees C and a nice breeze. Dry humidity and little pollution. I decided the one morning to have breakfast at the cafe downstairs, Comptoir de France. I while drinking my latte waiting for my American breakfast to arrive I was admiring the Harley Davidson Motorcycle that was parked on the side walk just the other side of the cafe’s hedge. It turned out the owner was sitting next to me and spoke perfect English.
We chatted at length while we ate and even afterward for almost an hour. 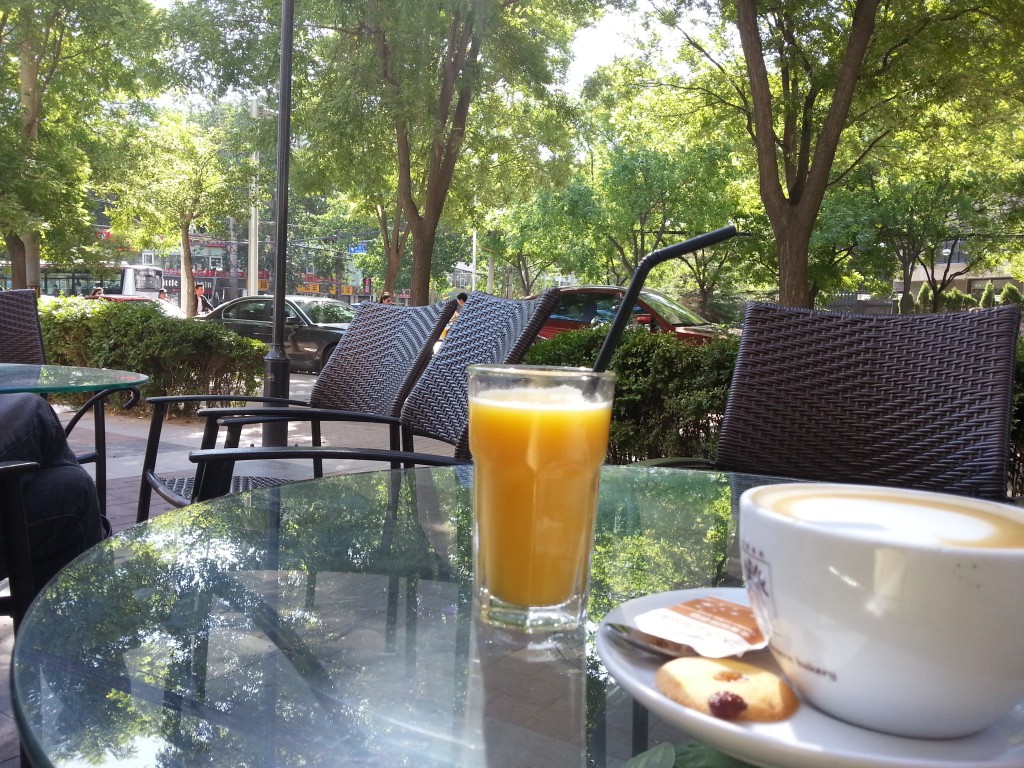 Zhang Wei, it turned out, was an artist in the Wuming or Noname group during the 70’s and 80’s. During those years he was sent down to the country for re-education, returned to Beijing and worked as a labourer for many years until fleeing to New York and ending up living there for 20 years as a result.
Returning to Beijing in 2005 he now has a studio in Suijia village a rustic collection of buildings North East of the 798 Art district of Beijing.
When we visited him this weekend, a tortuous taxi ride, probably deserving of it’s own blog, he had just finished packing and shipping a selection of his canvasses off to Basle for an exhibition there. He was able to show us a few of his latest creations using a Harley Davidson Motorcycle as his brush.
The canvas is primed and laid flat on his driveway. In the picture you can see the bare spot left by the canvas. 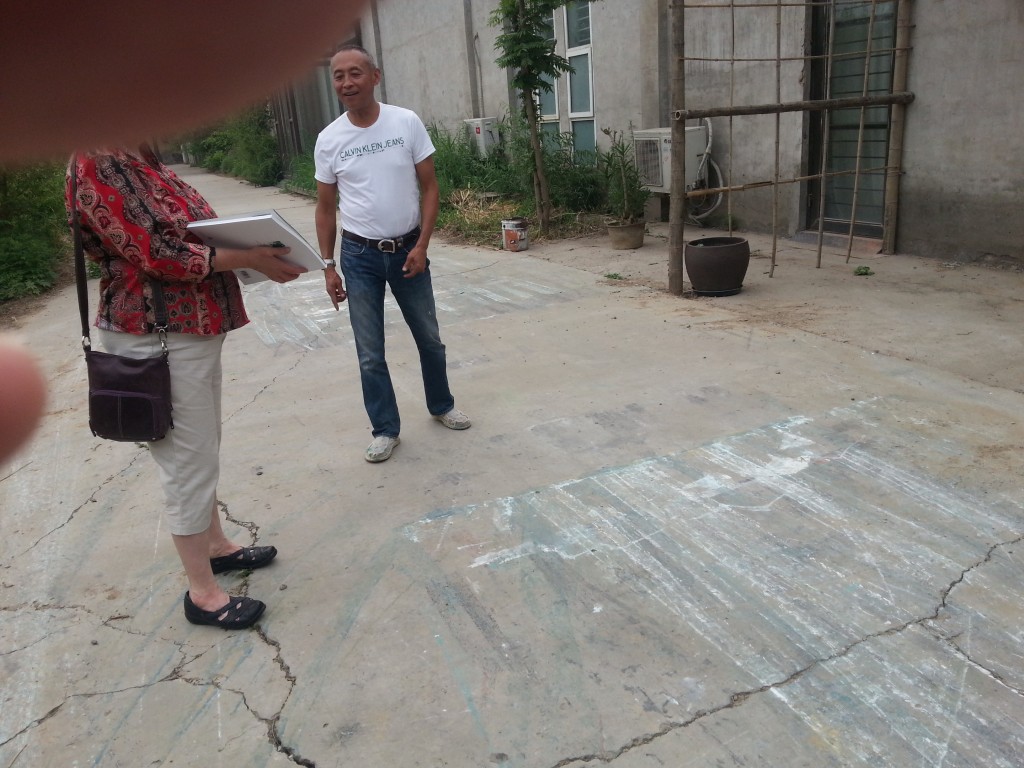 He places wood under the canvas in various patterns which eventually show up like those rubbings we all did using coins when we were young. The first example shows a woman’s high heeled pump. 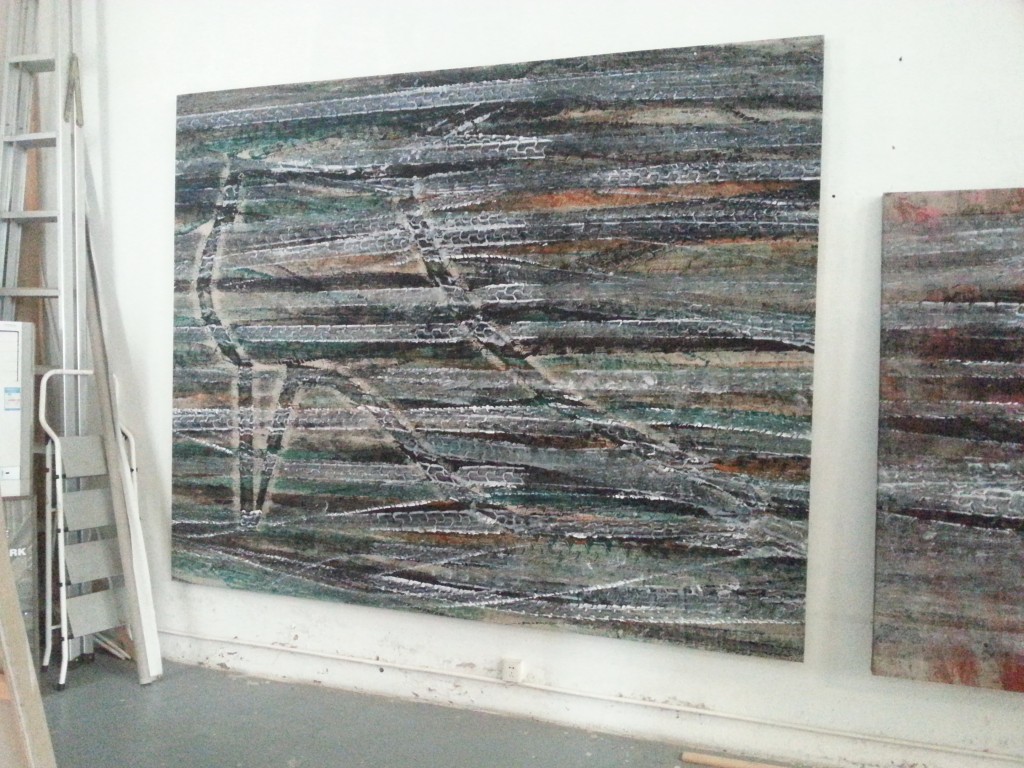 This one has a chair showing through, 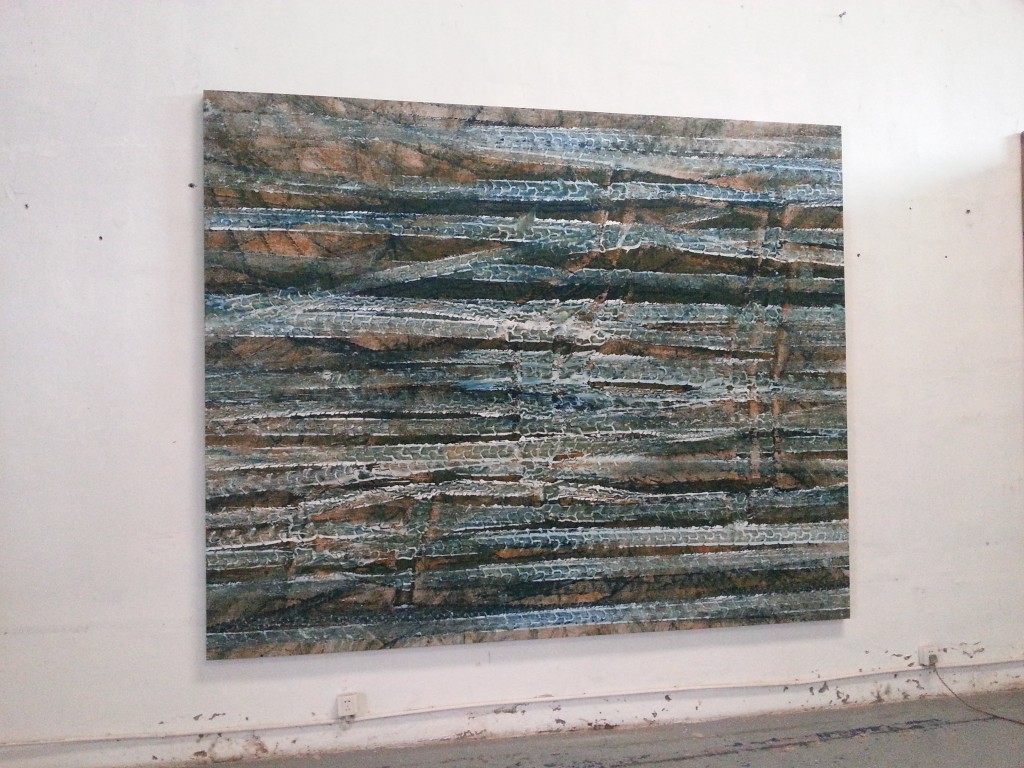 While this one he admits “really didn’t work”. 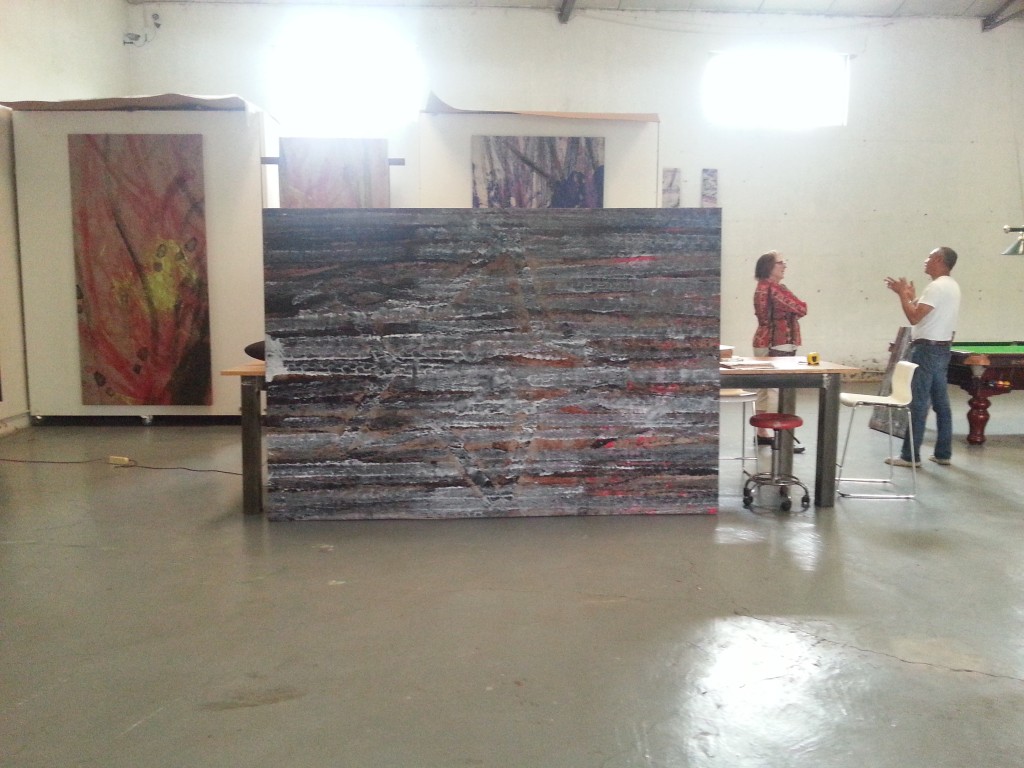 Some of his older creations also were hanging in the studio. My favourite was an abstract map of Beijing as shown below. Click on it to enlarge it. 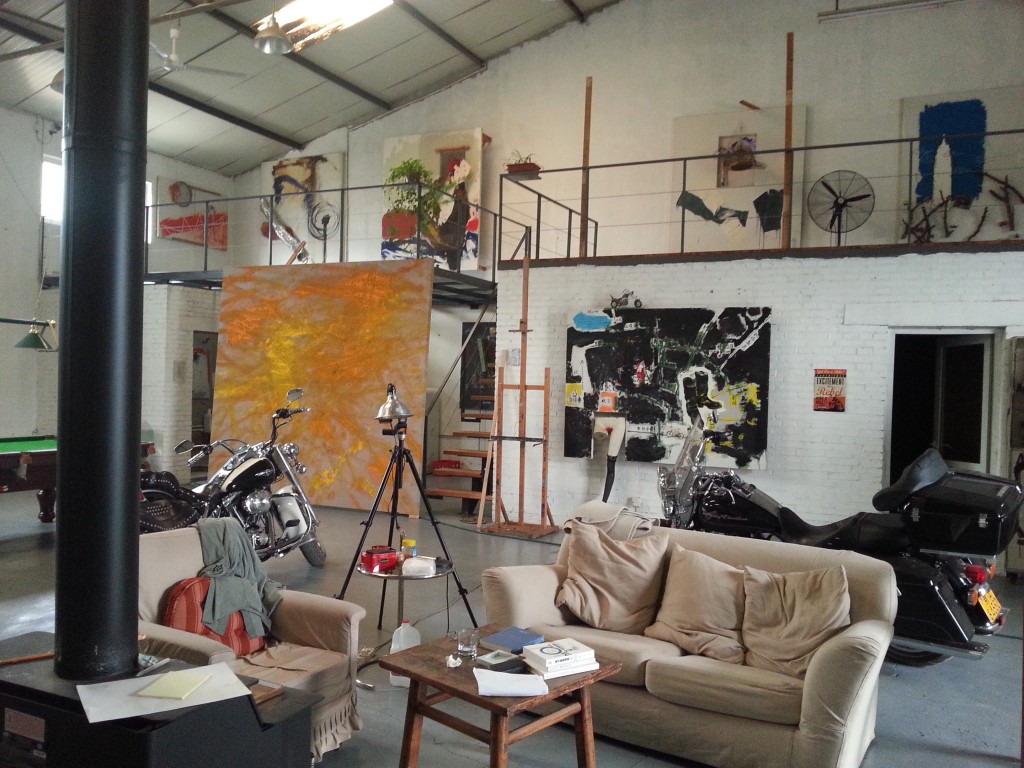 And yes the pink fuzz at the ladies genitalia is exactly where Mao Tse Tung’s Mausoleum is. 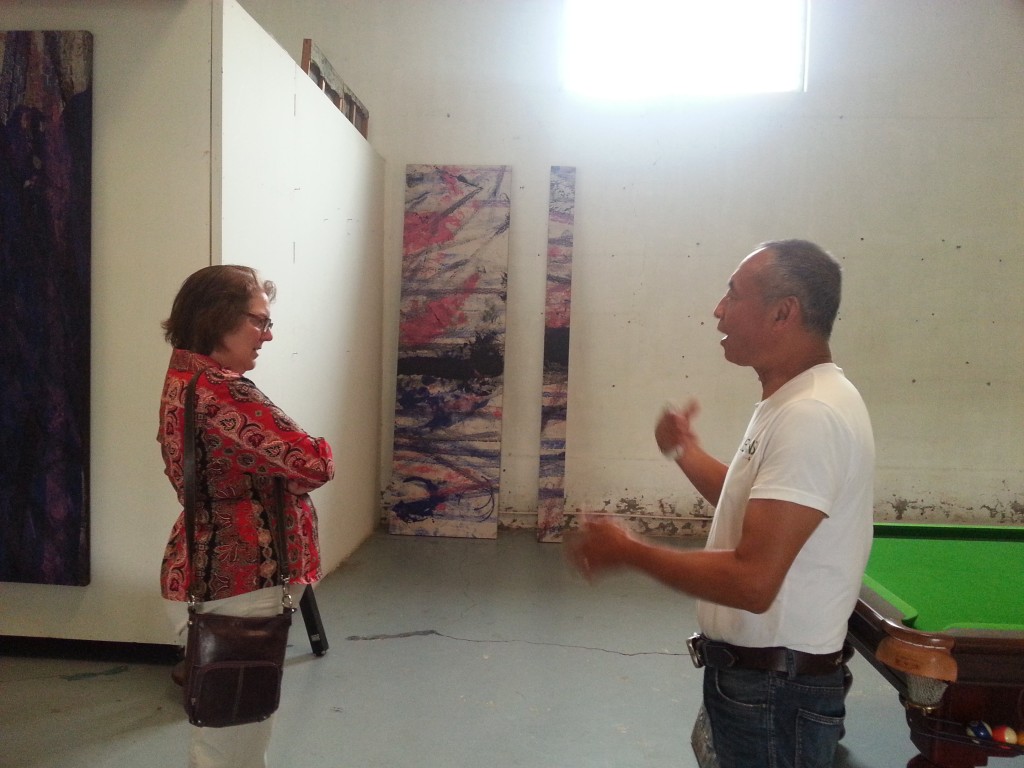 Zhang Wei in his studio explaining his technique to us

Wei Zhang is an entertaining and thoughtful person to talk to and his art reflects his view of life and his passions. I hope his show goes well in Switzerland and as Debbie said to him as we left'”I hope none of your paintings come back” which of course would mean that they had all sold. His wonderful sense of humour allowed him to laugh along with us at that remark. 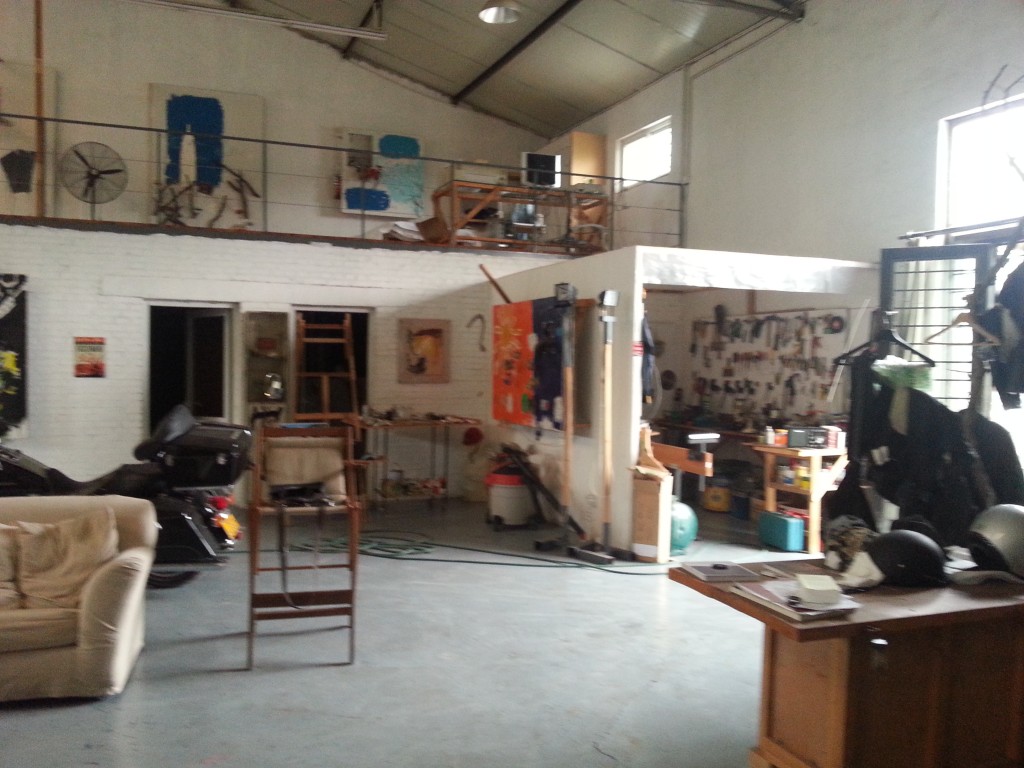 I hope I get to see more of Mr. Zhang both professionally and as a friend.