We spent a few hours yesterday getting our residency permit. It started a few weeks ago when we  chose which of the 50 or so apartments we wanted to move into.
The search for the apartment was in two stages. Debbie had looked for a few weeks in the summer and had chosen the area that we were interested in which was Chaoyang generally and the Lido are in particular. We waffled somewhat even this October when someone suggested we try first Riviera and then Shunyi but both were deemed to be too expensive or too far out respectively. The problem with the Lido area is also one of its strengths. It is one of the oldest areas in Beijing where expats were in the past allowed to live and in the present choose to live. This means that there a is complete range of apartment buildings both Chinese style, soviet style and modern neo-Chinese which resembles American but are, in many ways, uniquely Chinese.
The choice boiled down to a balancing act between what we could afford and what we could stand. The pollution levels in Beijing means that the older a building is, the dirtier it is and the harder it is to keep clean. We chose the Hai Run International built in 2005. You would be surprised how much dirt can build up in 7 years but the price was right and elbow grease is something I have lots of.
The landlord agreed to have the place cleaned including all the curtains although he insisted that he had just had them cleaned.

In order for him not to lose face I simply countered by asking him if he was married. He nodded and I said my wife wants them cleaned, He agreed and, to make a long story short, they came back with two of them in shreds and two with big tears in them. 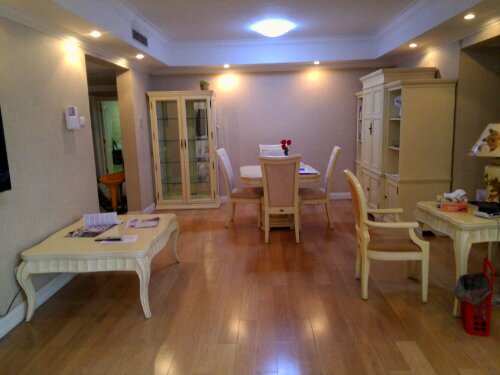 In any case I spent the last few days scrubbing as did Debbie on her day off. So we now had to register with the police to let them know where we live which brings us back to going out to the Police Station for Foreigners to register. We had our forms filled out, our passports with us and our driver was ready to explain to the authorities what we wanted. All in vain.

We were informed we needed yet one more form filled out by the Apartment complex management and verified by the local police station. Well you can imagine we thought we would have to do all this another day. Imagine our surprise when the management representative pulled out a couple of forms pre-signed with big red stamps by the local police. We were on our way back in a few minutes and an hour or so later had our temporary residence papers and were leaving when I noticed that the form stated that departure date was November the 27th.
I stopped and went back and asked why.
Of course they didn’t understand and our driver was unable to help since he didn’t speak english. Debbie called her assistant at the school and with her help and the help of an American journalist who happened to be there, and who spoke fluent Chinese, we discovered that we had been given a one month permit. No matter that they had been given a copy of both our lease and Debbie’s contract of employment they were insistent that we had to leave one month from the time we arrived. Debbie is confident that the training centre will sort it all out. I’m not so sure.

3 thoughts on “Facing the Faceless Bureaucracy”