Had an exciting and interesting day today.

We got our new bed for the second bedroom, a new computer desk for Debbie, the tap fixed in the kitchen and a new washing machine. And that’s just what other people did for us. What we did for ourselves got both our Adrenalins flowing.

The landlord sent around a couple of his minions in the morning to deliver and assemble an IKEA Queen sized bed and a small computer desk for Debbie. He had promised them as part of the deal we struck at the beginning of the lease, but like many things in China they seemed to take a while to come to fruition. 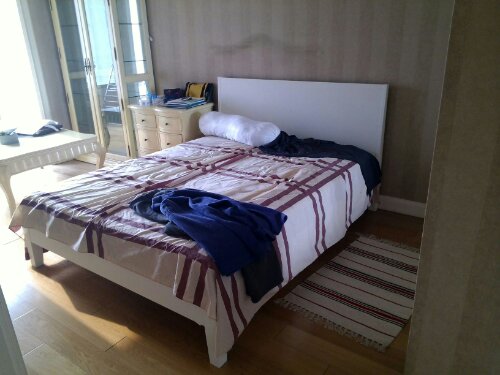 The minions assembled them and I got them to help move a huge glass shelve cabinet in from the livingroom and then they walked out leaving all the mess that comes from IKEA packing in the middle of the foyer. It would have been easy to be upset with them over this but for two things: one, I was able to glean the two IKEA supplied tools they used for assembling the furniture as well as, two, the assembly instructions in case we need to fix them later on.

No sooner had they left than a service man from the condo office knocked on the door (with his assistant) and indicated that he was here to fix the tap in the kitchen. I say indicated because he spoke no English and I still only can “NeeHow” and “Shay shay” for “hello” and “thank you”. Anyway with a bunch of twisting motions and pointing to the kitchen over my shoulder I soon got the point. Thinking that this was too good to be true as usual it turned out to be.

Five minutes later, after showing him what the problem was ( the space between the facet and the base leaked when the hot water was turned on) he proceeded to leave, followed by his minion. It turns out they were coming back and did so in about an hour and actually fixed the tap by putting in a new core or whatever they call it. During his procedure he turned down the hot water which meant that today I had to get down on my hands and knees and turn it up again which also turned out to be a good thing because I discovered not one, but two, water meters. Later it was explained to me that we pay separately for hot and cold water. The hot water comes from a boiler a block away and is used to heat many apartments as well as ours but as long as it keeps circulating we don’t pay for it. We only pay for whatever we actually consume into our sinks and down our drains.

No sooner had they left than the landlord showed up with another washing machine to replace the old one which is not spinning properly. Of course he didn’t wheel it in himself, he had a minion to do that. Interestingly he had the guy wheel the new one in before they took the old one out which made for a few three stooges-like  moments later on. In any case, they got it done. I tested it and it worked. Then I decided to do a second load including using the dryer. As soon as I pushed the button in to start the machine there was a loud bang and the lights went out. This was not a big deal because although I was in the utility room which has no windows it was still daylight out so I could see to go and reset the breaker in the panel just inside the  front door.

I thought that perhaps it was co-incidental and the meter in the hallway closet had run out at the same time so I went out into the hall, opened the electrical room door and peered into the stygian darkness of the electrical cupboard. Than goodness I had my cell phone with me which has a light that I can turn on.
The next challenge was to see if I could get someone to help me figure out what to do. I went downstairs and across the yard to the Service Office where the lady who usually could not speak English suddenly announced in fluid British English that she would send someone upright way after I mimed lights going out and a large explosion.
And she was as good as her word. In a few minutes after I had gotten back to the apartment young, well groomed young man of about 20 showed up who spoke impeccable English and listened to my explanation of the fact that the washing machine had blown not only my breaker but the one in the electrical room as well.  Although he checked my story out by entering the hall electrical room and making sure I still had enough credit on the meter first he proceeded to send up a repair person who had a key to the breakers there.
A brief aside here is probably necessary for those who haven’t travelled extensively out of North America. In Canada and the U.S. of A. we generally get our utilities based on trust although that is sometimes abetted by a deposit. In most of the world you have a meter for each utility which has to be fed money. In England it was shilling coins while in China it is a plastic card with a chip embedded which you charge up at the bank. Which reminds me I had better make sure out gas and electrical cards have some credit on them in case we run out down the road.
The water? you ask? No the water in Beijing is the exception.
Although we have both a hot water meter and two cold water meters, they trust us enough to bill us, although the Service lady down stairs who spoke clearly yesterday haltingly told me today that “never sure when” “Probable every 3 month” but she had no idea which month. It actually turned out to be 6 months and only cost us about 400 Yuan or $70 Canadian.
So here I was with the power back on but a problem not knowing whether the machine would blow the fuse again or was going to act ok. I stopped the electrical man from leaving and waved him into our apartment where I mimed turning it on again to see if it blew the breakers again. Surprisingly, he readily agreed by nodding vigorously. He stood by while I once again pushed the button. If he was expecting nothing to happen he was in for a surprise and, by the look on his face, shock. There was an even louder bang than before, the lights all went out and in the now late afternoon gloom a dramatic light show took place under the washer. It probably only lasted a second or two but there was enough arching and sputtering to make us both regard each other rather soberly as I reached over and removed the plug from the wall. He reset the breakers again and I showed him I had no intention of plugging the machine back in and he left. The landlord was apologetic when I called him but says he can’t do anything until Sunday but will bring me a new machine then. So the next challenge to to find a laundry near by. 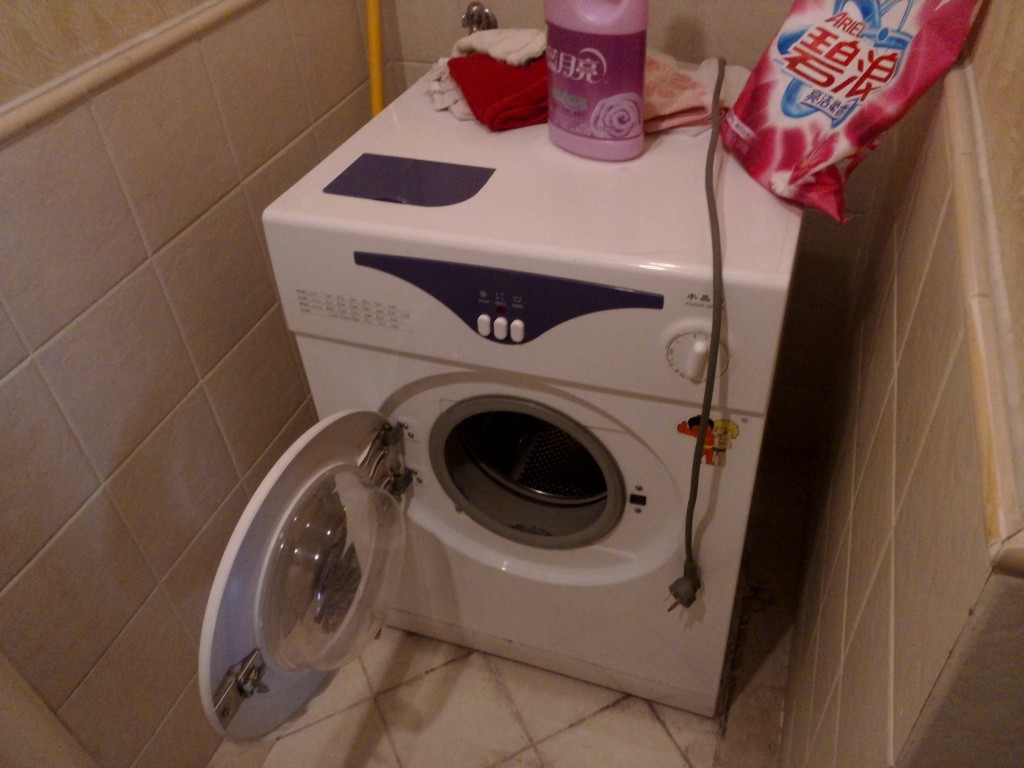 The reason Debbie’s adrenalin got flowing happened that evening when, after shopping for hours for practical life materials for her Montessori training class, and almost as much time trying to get bleach and vinegar for cleaning, she discovered at the checkout that she didn’t have here bank card. They would take neither Mastercard nor Visa although I noticed both signs on the doors as we left but thankfully we had enough cash to get the Montessori materials and I will have to get the other supplies another day.

Debbie spent a sleepless night only to find that in the morning it was in a different place in her wallet than she had looked. We’ve all done that.

Tomorrow I will try to relate the saga of getting internet working in China. Hopefully by then I will be successful.

22 thoughts on “I Blow up my Washing Machine”