We tried the subway the other day. Debbie’s interpreter was with us and she helped us to use it. It certainly was cheap and it being Spring festival and all it was relatively uncrowded. It cost 2 yuan a trip any where in the city and you buy a ticket from an electronic machine, slide it over the reader at the turnstile on the way in and stick it in the slot on the way out and “bob’s your uncle” you’ve done it.

Most of the stations have crowd control panels that protect you from getting pushed on the tracks when it’s crowded and I say it would be smart to avoid the ones that don’t. Line one seems to be the only line that doesn’t have them.

Debbie has a driver during the week for school business and you would think that that would be the best way to go but like anything it has its advantages and disadvantages. One consideration is that the drivers speak no English that they admit to although they sometimes seem to laugh at our jokes which makes me wonder. Any instruction therefore has to come through an interpreter. Sometimes Debbie calls her assistant who relays information and sometimes we use sign language. Another disadvantage of the system is that they are creatures of habit and once they have found a way to place they invariably go that way even if it is longer than it need be.

An example of this occurred when Debbie first started commuting to Shunyi from the Lido area. One of her drivers consistently exited the airport expressway once stop too soon and spent ages sitting in a traffic jam. The odd day when she had a different driver he exited a stop later than one would think would be best but avoided any hold up at all because he was travelling against the main flow of traffic and so had his side of the street relatively empty. Unfortunately she is rarely able to convince her regular driver to continue using this route. 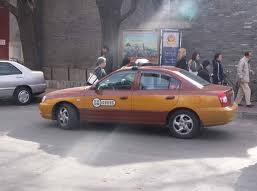 Taxis are ubiquitous in Beijing

Taxis are so cheap that we really have little incentive to travel any other way. The base fare is $1.61 which gets you 3 Km after which it’s about 30 cents a Km. We went half way across the city the other day for 30 yuan which is less than $5. We have yet to try the excellent cheap bus system here because it just looks so crowded and one of it’s advantages actually is also a deterrent. There are so many buses that determining which one to take is very difficult for someone not totally familiar with the city and especially with Chinese. Yanjinngxijie is easily confused with Yanjinglizhongjie when it’s crammed into a very small bus map. And they seem to leave out capitalization and spaces a lot of the time but not consistently. The streets around the Worker’s stadium and other landmarks are really confusing because they sometimes spell out in pinyin that the road is Worker’s stadium North Gate road east and sometimes call the road that crosses it Workersstadiumeastgateroadwest with no spaces. This looks much less confusing in English but when it’s all in Chinese it is very confusing especially since eastgateroadwest can be another street somewhere else near some other completely different gate.

It is best to have someone write down in Chinese characters the name and address of the place you want to visit to show to the taxi driver. This usually works well but some drivers just refuse to look at it and wave you off, forcing you to flag down another one. Most of the drivers are very good at trying to decipher our little slips of paper and we always have a “service card” as it is called from the office of the HaiRun Condos to get home with.